How Can You Tell If Your Kid is “Messed Up?” 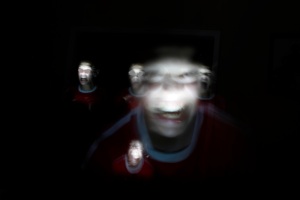 How can you tell if your kid is “messed up?”

And even if he or she is messed up – or should we categorize it as different – should this be a concern for the parents? Let me answer by describing myself.

I was a messed up kid. If I was one of my parents I probably would have done something very regrettable to try to correct it. Lucky for me, the worst they did was break a few wooden spoons on my bare ass when I completely drove them over the edge. Aside from that, they just sat back and allowed me to do tons of things that, looking back on it today do seem quite “gay” (for lack of a better term).

Now let’s consider my situation for a moment. Having adopted the label “The Functional Lunatic” I can hardly point to myself as an unmitigated success story and pinnacle of progress, but the reality is I consider myself quite successful in the grand scheme of things. I base this on my occupational accomplishments, family, health and general fact that there are many others much worse off than me. Before I get into the details I’ll say that I’m not sure I’m “successful” because of my messed up childhood or in spite of it.

My OCD and general strange behavior, which I still deal with today, was explained away by my pediatrician as artificial coloring poisoning…but I know the Truth. This was all precipitated by my dabbling in the supernatural which interested me before I was into double digit years. There were movies I watched that either brought out the ideas or just clarified them for me: the bust of satan in my bedroom, a little ball with a knife protruding from it that would fly about the house, my haunted attic, attacks I withstood in my own bedroom, to name a few. What I remember from an OCD perspective – and even feel today – is that I needed certain things to be True. I needed to hear things in a certain way, to touch things a certain number of times, to bring about things in a very specific way that I just knew had to be or I would feel extremely uncomfortable.

An example: for 2 years straight, every night, I would yell down to my parents from my bed for literally hours. I would simply yell “good night!!” over and over – and I would need a response. When I got a response the first 2 or 3 times, I would need another response because the first one wasn’t right, or I wasn’t in the right position when I received it. After that, my parents would try to ignore my screams. They nearly killed me because of the problems I caused. I woke up with devastating nightmares about having to touch thick things and immense tasks that needed to be re-done because the first time it either wasn’t done right or it got knocked down or wasn’t foundationally perfect. If my kid was going through this I would be extremely concerned. Wouldn’t you?

Then I got quiet. I remember the day it started. I was learning to do everything lefty because I had simply decided one day I was going to convert to being left-handed (this was inspired by my admiration of Paul McCartney, the Beatles’ left-handed bass player). For many years I blamed Kevin McReynolds because it was after him that I modeled my silence. But only recently did I realize that Kevin is not to blame here.

In high school, I left school often (many times during chemistry class) due to migraines, which always started with the loss of peripheral vision that slowly squeezed my sight until I could barely see. The way I would confirm the onset of these issues (as if the loss of sight wasn’t enough) was to try to say “Nebraska.” When I couldn’t remember the state’s name, I knew I was in for it and would ask to be escorted to the office. Only later did I consider that the origin of the migraines and cognitive/visual problems may have been seizures.

Why seizures? As a child I had many severe concussions from falling off chairs headfirst onto concrete floors, smashing my head against snow covered fire hydrants and the worst one which was a gymnastics injury in which I couldn’t remember what day it was or my name, then blacked out and mumbled nonsense for hours. In fact, through reading “Musicophilia” by Oliver Sacks, I now believe that my musicality, creativity (and terrible memory) may be a symptom of my many head injuries as a child.

So, yeah, gymnastics. That’s what I said. As I mentioned before, I did a lot of “gay” things as a kid. And by that term, I mean no disrespect to homosexuals. I think even they would admit the stuff I did was pretty gay. Competitive gymnastics was one of them. I was good. I won a national invitational 2 years in a row when I was 10 and 11 (in the 12 and under age bracket). I was on my way to my third in a row when I unexpectedly quit.

But there was more. With all the things I did as a kid/young adult, if I was my father I surely would have wondered about my son. Aside from the gymnastics and the little leotards we wore, there were the 3 body waves I got (uh, not perms but body waves), my love of a Cabbage Patch Kid doll, the earrings in both ears (when that was absolutely unheard of), modeling, writing poems, going to gay clubs, my partaking in “Fluorescent Day”, playing the clarinet, singing, hanging out with girls starting in kindergarten, god it goes on and on! Yet my friend who I learned late in our friendship actually was gay, did none of these things. He played football, had girlfriends, hung out with the guys, was tough – even physically intimidating – and funny.

My advice* boils down to this: let your kid be…just be. It is unlikely you’ll be able to change them anyway and much more likely that you’ll isolate yourself from them in the long run.

*And of course my disclaimer is that this is just the humble opinion of a lunatic…but a functional lunatic.

1 Response to How Can You Tell If Your Kid is “Messed Up?”